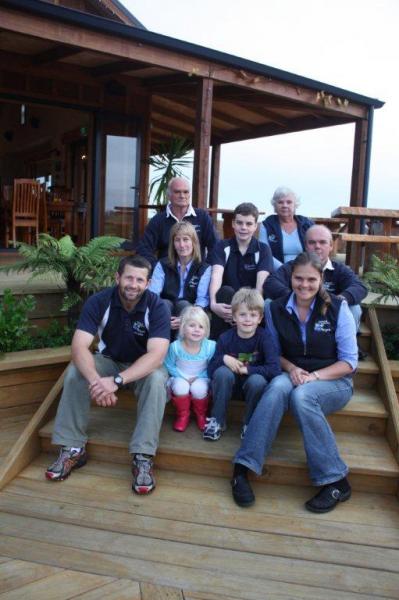 Paul & Mieke, and their two children, Marco (then aged 13) & Marije (then aged 2), immigrated to New Zealand from Holland in 1980, with a dream to own land of their own. Prior to moving, they came to New Zealand on a short holiday, and had pinpointed several places on a New Zealand map, which they liked to live in, including the Waikato and Canterbury Plains (maybe due to how ‘flat’ these places were, reminding them of Holland).

In 1985, Paul & Mieke purchased a 10 acre property covered in scrub near Cambridge, after seeing a small advertisement placed in the classified section of the NZ Herald. Paul could see past the gorse, blackberry and teatree scrub, and commenced ‘breaking’ the land in, as it had never been farmed before. Whilst continuing to live in Auckland, to earn money, they slowly started building a house on their property, coming to the property every weekend, to work on the house and farm. In 1987, the house was completed. The first blueberries were planted on the orchard in 1985, as well as differing other crops including pip-fruit trees, feijoas, and boysenberries. Over the years, many other crops, including beans, lettuces, tomatoes, courgettes, and strawberries were planted and sold to the local auction markets. They traded under the name Goodlife Gardens.

Paul & Mieke made a strategic decision to farm their orchard organically for a number of reasons. They lived on the property, so they did not want any chemicals. Paul, through his previous work experiences, had also experienced first hand what chemicals had done to the land and his health, so knew he did not want to farm in this manner. They also wanted to farm their land in an environmentally sustainable, natural and chemical free way and wanted to provide those who wish to eat healthily with a good quality organically certified product. Monavale Blueberries are BioGro NZ organically certified.

Blueberries seemed to grow well on the peat bog, which is over 8 meters deep in places, so more blueberries were planted on the orchard, and the other crops were slowly phased out. Paul & Mieke purchased a neighbouring 10-acre block in 1989, and slowly began to develop this land into a viable orchard block. In 1991, they purchased a further 10 acres on the corner of Wallace & Turkington Roads

In 1990, Marco & his wife Kath, while living in the UK, bought a further neighbouring 10-acre block, and developed the land. Marco had obtained a degree in Engineering at Auckland University and was working as a Civil Engineer in the UK. They moved back to New Zealand in 1995, and designed and built their house on their property, as well as planted their property in blueberries. They traded under the name Monavale Estate.

In 2001, Marije & her husband Richard, bought a neighbouring 10-acre block. They planted the land in blueberries and traded under the name Irresistible Blueberries – Irresistiblue. Marije obtained a Bachelor of Management Studies at the University of Waikato, and had been working as a marketing consultant in Auckland, and Richard was a secondary school teacher.

In 2002, the family decided to amalgamate their 3 neighbouring orchards to form Monavale Blueberries. Packing operations and office duties were centralised. Marco & Richard left their jobs and became full time employees on the orchard, alongside Paul. Kath & Marije also left their jobs to start their families as well as complete office duties and general orchard work, along side Mieke. A further full time employee was hired to complete general orchard maintenance.

In December 2009, Café Irresistiblue was opened, after a long held dream of the family, so that more people could enjoy the beauty of the area and see the orchard. Paul & Richard handcrafted all of the wooden tables within the cafe, and there are many other unique features in the cafe, including wrought iron chandeliers, specially designed leadlight window, large wooden decks, wooden panelling, and an antique cooper collection on display.

The café and orchard are situated centrally in the Waikato only 10 minutes out of Cambridge, 15 minutes from Te Awamutu and 25 minutes out of Hamilton. The cafe can cater for up to 60 guests, with orchard tours available. With high ceilings and a rustic, country feel, this cafe is a great place to visit, relax and enjoy a cup of coffee and a meal, overlooking the organic blueberry orchard. The focus of the café is of course the delicious organic blueberries and organic blueberry products, as well as other products sourced organically or locally or both, where possible. There is a fantastic all-day menu as well as a delicious cabinet and blackboard menu. The cafe has extensive views over the orchard, as well as stunning views towards Pirongia, Kakepuku and Maungatautari mountains. Huge decks and large windows give you the ability to sit and enjoy the views, whether you are inside or outside.